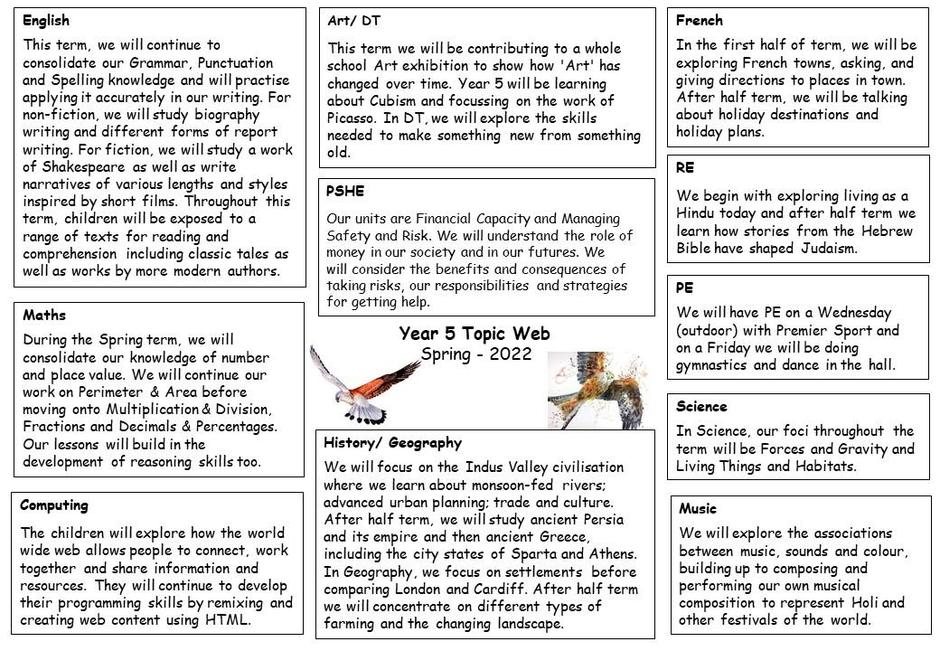 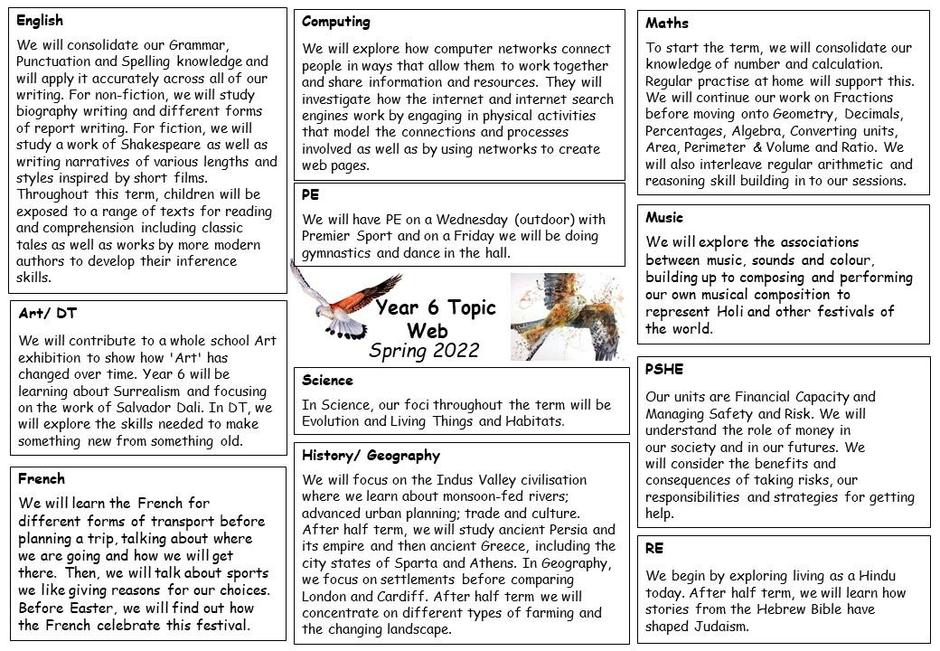 Kestrel Class performed incredibly during their first full week back in school. They have produced very high quality biographies in English, created amazing art projects for the showcase, and started new topics in history, geography and RE with enthusiasm. In maths, Year 5 have finished their perimeter and area topic, moving onto to multiplication, whilst Year 6 have been adding mixed numbers and fractions. Year 5 have started their new topic, 'Forces', in science, whilst year 6 have started looking evolution. Well done for all the effort, we are all incredibly proud with the determination the children have shown!

All of our kestrels came with amazing desire to learn as we welcomed them back to school life this week. Refreshed after a couple of weeks off, they got their heads down and aced everything thrown at them! In English we started a biography unit, specifically looking at the lives of Pablo Picasso (Year 5) and Salvador Dali (Year 6), conducting research into their history and achievements. We also used these 2 artists as inspiration for our art lesson this week, with Year 6s creating Dali inspired initial sketches for a upcoming clay project, and Year 5 creating their own Picasso inspired cubist portraits, ready for their big project next week! We started a new finance topic in PSHE and continued where we left off in science and maths. Well done to all kestrels!

In our final week before the Christmas holidays, Kestrel class did not let up the pace, finishing all of our learning fantastically. In English, we have been creating a narrative or series of diary entries based on a short film, trying to capture the voice and emotions of the characters. In maths, Year 5 have continued their work in perimeter, whilst Year 6 have been finding equivalent fractions, placing fractions on a number line and ordering by their denominators. The children have also completed their Rangoli lanterns in art, finished mountains, cradles of civilisation and Hindu stories topics in geography, history and RE respectively, before ending the week on a variety of Christmas themed activities.

This week Year 5 and 6 have been furthering their learning through a variety of fun activities. Things we have done this week include:

- Continuing our Jabberwocky topic in English, creating our own versions of the poem.

- Looking at multiplication, division and perimeter in Year 5 maths, whilst the Year 6s have been furthering their calculation skills.

- Touch rugby and the golden mile in PE.

- Cradles of civilisation in history

- The story of Arjuna in RE

Year 5 and 6 have been busy with their learning across many subjects this week.

Some of the highlights have included:

We ended the week by enjoying a Speed Stacking competition and an afternoon of Christmas craft making across Kite and Kestrel classes. What a lovely way to end our week together!

This week was a very busy week for kestrels, comprising of both anti-bullying week and Children in Need! We have been completing various anti-bullying week tasks in English and PSHE, focusing on what bullying is and the strategies we can use to try to stop it. In maths, Year 5 have been looking at multiplication and Year 6 have been looking at division. Year 6s continued using circuits this week in science, looking at the difference between current and charge and drawing circuit diagrams. We have also started gymnastics in PE, continued our topics in history, geography and RE, and done some Pudsey inspired colouring.

Kestrels produced some fabulous work this week, particularly their very high quality information reports. They created double page spreads about rivers, the Ancient Egyptians or Rama and Sita, adding colour and diagrams to make them amazing! In maths, both Year 5 and 6 looked at multiplication and division, with everyone improving their skills. In other areas of learning, the children continued their civilisations, mountains and Hinduism topics, created more zentangles in art and had a very special street dance lesson!

Kestrels returned with a fabulous attitude this week, throwing themselves into everything with amazing enthusiasm. We have researched the Ancient Egyptians and rivers in English, planning for an information report that we will writing next week. In maths, the Year 6s have been continuing with multiplication and division, with the Year 5s doing a unit of work on statistics. In other subjects, we started to look at mountains in geography, zentangles in art and more Hindu stories in RE.

Kestrels can finally land and take a rest after this week, putting in all their effort before half-term! Although the Year 5 residential was unfortunately cancelled, they have been doing other fun activities including composing music, making sweet treats and designing halloween parties! The Year 6s ploughed valiantly on through assessments on Thursday and Friday mornings, joining up with the Year 5s in the afternoon to whole afternoons of Forest Schools and PE respectively. Thank you for all of the children's efforts this half-term, and we hope they have a wonderful break!

There was no hovering for our kestrels as they continued rising through their learning, Years 5 and 6 both finishing their addition and subtraction topics in maths, moving onto statistics in Year 5 and multiplication and division in Year 6. Year 6s also got an extra fill of maths and science on their STEM day, representing the school extremely well and making us all very proud! In English, we looked at a variety of punctuation and grammar points to help push all of our writers to the next level of accuracy and quality. We also made models of v-shaped valleys in geography, practised short passing in hockey and conducted experiments in science!

Half of our kestrels swapped their wings for two wheels this week, with many of the Year 5s taking part in Bikeability! They completed 4 days of cycle training, including some sections on roads. Everyone who took part was fabulous and represented the school extremely well. In other areas of learning, both year groups continued their topics on addition and subtraction, with the Year 6s cracking on with inverse operations. We completed some Zentangle art, played our first matches in hockey, continued our rivers and Egyptian topics in geography history, looked at expanded noun phrases in Year 5 English, and refraction in Year 6 science.

Kestrel class spread their wings this week, starting a new topic in maths and using a very different style of writing in English. In English, we have created some fabulous newspaper articles about Howard Carter's discovery of Tutankhamun, challenging the children to write in a formal manner. In maths, the Year 5 and Year 6 classes have both started addition and subtraction topics at their appropriate levels. The children's skill levels in all of the other subjects are continually improving, with some great results produced in PE, geography and history!

The Kestrels took off in their learning this week with a fabulous 5 day English project, plenty of high quality maths, and brilliant efforts in all of the other subjects! We researched, wrote and edited 4 diary entries about Howard Carter's discovery of Tutankhamen, dived further into place value in maths, and continued Ancient Egyptian, Hinduism and rivers topics in history, RE and geography respectively. In science, the Year 6s investigated shadows in our light topic, whilst the Year 5s were testing materials to uncover their properties.

Our flight of Kestrels split into two groups at the start of the week, with the Year 6s going on a trip! On this trip they did a range of activities from high ropes courses, to beach activities, to knife carving (photos in the gallery section of the website). Whilst they were away, the Year 5s had a great time researching about Egypt, using chalk in art and taking part in a forest skills session. Finally, when the two halves of the class reunited for Thursday and Friday, we created double page spreads of the Iroquois creation story in English, continued with our hockey in PE, and looked at the River Indus in geography.

Kestrel Class have been flying through their learning this week! We have been looking at place value in maths, creating exciting sentences and writing story openings in English, and then a whole range of other activities in the afternoons. Children particularly enjoyed a lesson on code breaking and ciphers in computing, starting a unit of work on zentangles in maths, and refining their dribbling skills in hockey!

The topics year 6 children will cover this term

The topics year 5 children will cover this term

Over the first two days, Kestrel class have settled in well and enjoyed getting to know one another! We have done a recap of times tables and place value in maths, started to write a letter based on the book 'Dear Teacher' in English, and completed various PE, PSHE and art activities in the afternoons. Here are some children making their backgrounds for the art project we have been doing.

Photos from our art project

Unfortunately not the ones with chocolate chips.

Some cookies are necessary in order to make this website function correctly. These are set by default and whilst you can block or delete them by changing your browser settings, some functionality such as being able to log in to the website will not work if you do this. The necessary cookies set on this website are as follows:

Cookies that are not necessary to make the website work, but which enable additional functionality, can also be set. By default these cookies are disabled, but you can choose to enable them below: